It seems like Americans do forget something on 9/11 (and perhaps year-round). We’re not the only ones with a death toll. About 3,000 people died as a result of the September 11th attacks. After a quick google search, I learned that more than 3,000 civilians have died in Afghanistan alone in just the first six months of 2010. And since 2003, more than 100,000 civilians have died in Iraq. Every life counts. So I’m not saying the importance of the American lives lost is diminished by the number of those lost overseas. But why does it seem like American suffering trumps that of all others – especially when September comes around? I wouldn’t mind so much if Americans ever acted like they gave a damn about anyone else. But I don’t see much of that.

And this year the September 11th hype is so much more. With the mosque/Islamic community center controversy and this clown starting the public Qur’an burning nonsense, this year’s 9/11 anniversary seems to be clouded by hatred and tension more than anything – at least in the news. It all seems so absurd.

The nastiness of it all has made me pleased that I’m taking a break from this country. People are more sane in other countries, right? Wrong.

Out of curiosity, I took a look at some Dutch headlines relating to September 11th in the U.S. I still don’t know which one is the most mainstream paper in the Netherlands. But across all the papers I read, it seems like Dutch sentiments are just as split, and in some cases twisted as Americans. And just like Americans, some Dutch people have trouble minding their own business and have decided to get involved with issues that don’t relate to them.

The leader of the Dutch Freedom Party, Geert Wilders, is one of those who’s having trouble minding his own business. I’ve mentioned him in an earlier post. But to spare you the trouble of reading that all over again (although I’m sure it was riveting the first time through), he’s an uber conservative who’s pretty close to being a part of the next coalition government. Although Wilders’ politics are extreme, for some reason he gained enough momentum in the recent June election to make him less than marginal. Doesn’t bode well for the Dutch, as far as I’m concerned.

So anyway, Wilders has hopped on a plane to come to NYC to participate in and speak at one of the protests against the Islamic community center by the WTC site. He was invited by a group called Stop Islamization of America (I haven’t even bothered to investigate what they’re about). Apparently he’s so strongly opposed to the plan, and Islam in general, that he felt compelled to be here to vocally protest. I’m all for free speech. But c’mon, man. Just stay home. 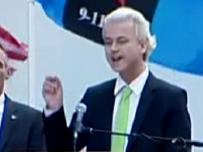 Fortunately, Wilders doesn’t represent all Dutch people. In fact polls indicate only 20 percent of Dutch people supported Wilders’ participation in today’s protest. But 41 percent were neutral and only 39 percent were opposed to his craziness. That’s not enough opposition for me.

So leaving the U.S. for the Netherlands will not mean leaving behind conservative and sometimes hateful politics. They’re just everywhere…and apparently willing to travel as much as I am.

In spite of all that, my heart sincerely goes out to every single person affected by the September 11th attacks and subsequent violence, here and overseas. I hope at some point we’ll see that none of these losses, none of the pain, and none of the hateful words and exchanges have been worth it. At some point it has to end.

3 thoughts on “A Tense Anniversary”