When I heard that Prince would be performing in the Netherlands, of course I knew I would be there for at least one of the shows.  Other than my guaranteed presence, I didn’t know anything about the context of the performances.  Would it be a European extension of the Welcome to America tour?  No clue.  But obviously it didn’t matter.  As you know by now, Prince could show up in a bathrobe, perform karaoke Backstreet Boys, and I would cry tears of joy from the very back row of a stadium.  The context really didn’t matter.

But it turns out the context was almost as cool as Prince himself.  The North Sea Jazz Festival is an annual weekend of incredible music in Rotterdam.  Each day offers an unreal line-up of artists on separate stages.  So not only must you decide which day(s) to attend, you must also sketch at least a loose schedule to be sure you get a taste of everything you want to see and hear.  Prince closed-out each day of the festival – Friday, Saturday, and Sunday.  Since I could only afford one day (and barely that), I chose Sunday, with the hopes that he would save the best for last.  The other artists scheduled for that day would be a bonus.  But honestly, I didn’t know who else would be there until after I purchased a ticket.  Some of the artists from other days who I sadly missed were Chaka Khan, Janelle Monae, and Esperanza Spalding.

So Sunday in Rotterdam.  It was going to be tricky.  Prince wasn’t scheduled to finish until 1:30am (the earliest of all three days).  And since I don’t know anyone in the city, I thought about staying in a cheap hotel for the night.  That was going to be expensive and likely a hastle to get to after the show. So I decided I would either rely on a combination of taxis and night trains to get me back to Amsterdam after the festivities were over, or commit to partying all night until I could return home in daylight.  As it turned out, sometime during Snoop Dogg’s performance, I decided it would be an all-nighter. 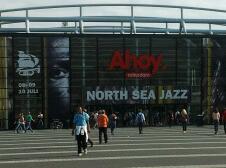 I arrived at the festival a little bit after 5pm.  The main stages were all indoors, which seemed unusual.  It felt like a mall of live shows, with arrows pointing to the various “rooms,” for the performances.  Everyone carried around little schedules for the day, listing at least eight options for any given time.  Music poured out from every which way…to the right, in the back, upstairs.   Lesser-known bands  (all high quality) performed  on smaller stages outside, which felt like refreshing transition spaces between the big shows.  Anywhere I walked, at any time in the day, I could find something new, and likely exciting.

In addition to the music there were food and drink stands all over the place.  But to purchase anything, I had to hand over a wad of cash to get tokens, the only accepted currency throughout the festival (a stroke of capitalist genius).  I turned in token after token for beer, dutch pancakes, and apparently some other stuff.  Because by the time I reached Prince, I had to purchase more tokens.

The first main performance I saw was Raphael Saadiq.  And it was a legitimate, 1.25 hour show.  I pushed my way toward the front and danced along with the equally hype crowd.  Brilliant. The next big one was Tom Jones.  I didn’t stay for the middle of his performance, as I was distracted by another band outside.  But I did return just in time for him to close with his version of Kiss, which felt fitting.  I danced like I was the biggest Tom Jones fan in the room, which I can assure you I was not.

Snoop Dogg was next in the same spot.  So lots of folks just waited in the hot venue for him to come.  And perhaps to everyone’s surprise, he started on time.  Rage opened up for him.  I was happy to see her and her afro puffs, rockin’ on with her bad self.  Warren G was also there.  And of course they did a Nate Dogg tribute.  Tall Dutch people in front of me prevented me from seeing everything.  So I’m pretty sure I missed some scantily clad ladies doing whatever it is that they do.  But it was for the best.  I enjoyed the music without having to see everything.  And I danced to the point of exhaustion and sweaty discomfort.

Oh, and then there was Bootsy Collins!  He’s a legend who I imagined I would never see perform live.  But there he was, in all of his funky, sequined glory. At this point, I was just so thoroughly entertained, it almost didn’t matter that Prince was starting in 30 minutes.

But yeah right.  I had to leave Bootsy early.  On my way out, I grabbed a piece of apple pie and briefly stopped for a jam session happening in the hallway.  But then the pie and I made our way over to Prince’s venue, almost in a jog.

I fear I’ve already gone on too long before getting to the best part.  Shoot.  So the show wasn’t nearly as flashy as the stateside version.  He started off with ballads on a barely lit stage.  And then we got a bunch of the classics, as he gave a shout to those of us who understood.  And I have to say that was most of the crowd, an incredible crowd of like-minded lovers of Prince.  Two encores later, it was 3am.  He left the stage.  But about 25 percent of the crowd refused to believe it was over.  We shouted, chanted, and banged on chairs.  But when they finally took away the mics at 3:30, we accepted that he was long gone.

I took a taxi to an after party, with the hopes that I would dance down a soul train line with Prince and Bootsy. But no such luck.  But I did hear some more live music that kept me going until after 5am, at which time I was completely faded.

With incredibly sore feet and blurred vision, I walked to the train station in daylight. And I rode the train back to Amsterdam with grown-ups who were starting their Monday morning after full nights of sleep.  But as crazy as I must have looked, and as exhausted as I was, it was a perfectly fitting ending to one of my favorite days in the Netherlands.

3 thoughts on “Prince…among other producers of awesomeness”