I tend to be secretive about my most sacred and valued hopes and dreams. I’ll quietly decide to try something days or months (or never) before telling anyone about my intentions.  The less everyone knows about what I’m doing, the less everyone will be disappointed by my inability to accomplish whatever it was that I probably shouldn’t have told them about in the first place.  And trust me: I have not accomplished plenty.

In addition to a fear of expectations, there’s also the jinx factor.  If I fill others in on a plan, the plan is then doomed to failure.  For example, after telling everyone that Savion Glover would one day be my husband – it’s almost 20 years later and well, obviously no Savion. That’s because I jinxed it.  That apartment I deemed perfection, the job I thought would guarantee happiness, or the man I was sure was him – it rarely ends up being what I said I wanted.  If I’m honest, in most cases, it ends up being something better – something I didn’t imagine for myself.  But when I set my sights on something I really, really want (like the Savion thing), I don’t want to tempt fate into finding something better – or worse, more challenging than what I actually want.  So while I try to get between points A and B, if B has any level of significance, I won’t be saying too much about it.

I started the blog when I began to realize how terrible this strategy could be.  As much as I’d like to believe it’s possible to do everything for and by myself, I know it shouldn’t always be that way.  Support and guidance can be wonderful things.  But I’ve recently fallen off the blogging thing – writing altogether, really.  And I’ve caught myself a couple of times thinking I have nothing to write about.  Nothing worth sharing.  So I’m a “black girl”and I’m “gone.” Yeah, now what?

Truth is, a lot is now.  I’ve just been backsliding into my old, secretive, suffer-in-silence ways.  As the comforts of my student life appear to be approaching an end quite quickly, a number of grown-up realities – big girl decisions – have come into play.  Money, career, home…scary-type stuff.  The stuff I was temporarily happy to set aside.  And no offence, or anything, I just didn’t feel like sharing the next steps with you.  What could your knowing offer other than a jinx on an already tenuous situation?

Yet, although I still mostly believe that, I need to get over it.  Particularly because I’m about to be getting “gone” again.  And that is what this blog is supposed to cover, as the title would suggest…

Black girl gone…to Suriname – in (about) two months for (about) two months.  I’m dragging out the fieldwork and writing process for my Master’s thesis to incorporate the research I’ll do over there in the coming semester.  So this means I will remain a student for just a bit longer.  A bit like cheating, perhaps. But you would do it too.

And while I continue with my thesis research, and as I work through the logistics of a temporary move from Europe to South America, I’m working out a business plan.  Because in 2013, I have no intentions of working for the benefit of someone else’s mission. My mission is to introduce young (and all) black people to our histories by paying tribute and learning the stories of our ancestors, beginning with their own ancestors.  And I’m really excited to turn that into a full-time gig.

It will look like a nonprofit organization, based in the U.S., with a branch office in the Netherlands (ahem).   Partnerships between schools and local genealogical societies (read: young and old) will provide young people with African ancestry in the Americas with personalized research into their family histories, enhanced by their own culturally and historically-relevant experiences and research. In the long-run, we’ll provide the young people with travel opportunities.  But at the moment, my priority is just to clarify and prove the concept. 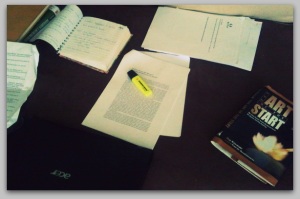 Yeah, and that’s where I draw the sharing line.  And that just left me pretty uncomfortable.  We still have some issues to work through.

So here’s hoping I didn’t just jinx the isht out of myself. And further hoping that I can find sources of support and encouragement among you, in addition to a willingness to hold me accountable!