As I mentioned earlier, I’ve spent a lot of time with the team managing the archives of the Moravian church, also known as Evangelische Broeder Gemeente Suriname (E.B.G.S).  And this may be some evidence that differing belief systems need not stand in the way of best friendships.

The folks from the archives are working hard, providing a valuable service to the community.  They care about history and value its role, particularly in the lives of many Black Surinamese.  For those with ancestors who joined the Moravian church at some point in the generations since arriving in Suriname, the records can trace back quite far, making them a valuable and much-appreciated resource.   But none of us can deny that these records have some dirty roots.  And they’re associated with the German missionaries who had little or no perception of the humanity of their “saved” subjects.

My feelings about the church’s history are complicated.  Sure, they may have cosigned and perpetuated the enslavement of African people during the years of legal slavery, and maintained systems of mental slavery well after – such as through the marginalization, even criminalization, of traditional, African-influenced spiritual practices.  But those Christian missionaries kept some damn good notes. 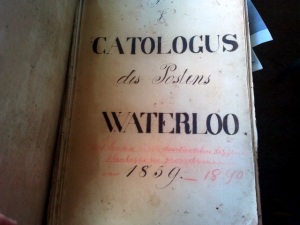 Among enslaved converts, the records were copious.  Not only did they record the dates of baptisms and adopted Christian names, family relationships and physical descriptions were sometimes included.  For African people recently brought to Suriname, their ethnic group and area of origin were commonly recorded.   And they tracked pretty much every indiscretion of an individual that may have led to judgement or exclusion from the church.  For example, when someone attempted to escape from a plantation, the incident and the resulting punishment were recorded.  Or, every time a man (or woman) cheated on a committed partner, the occasion was written in the missionary’s notes, including names and the juicy details, in the better cases.  For although they accepted that enslaved couples could not marry legally, they expected the couples to live as close to Christian norms as the laws of Suriname would allow – like the 1 woman + 1 man rule.

So, assuming the notes are legible, and one speaks a fair amount of old German, missionary notes that pre-date the nineteenth century can provide some people with the information that so many of us just hope for.  A man who has adopted Christianity offers his African name and ethnic group of origin, along with the name of his committed, romantic partner, and his tendency to cheat with a woman from a neighboring plantation.  C’mon, that’s jackpot.

In the decades following legal slavery in Suriname, the church continued to maintain detailed records and track the lives of its followers.  And since families often stayed close-by, in the same areas for generations, they can be relatively easy to trace.  Details of births, baptisms, (now legal) marriages, and deaths can be found in these gigantic, stereotypical-looking, old books.  And because they’re frequently mentioned in comparison, I assume some of the other local churches, such as the Roman Catholics, maintain a similar level of abundance and detail in their records.  So, all things ugly still considered, I enthusiastically recommend church records to anyone who’s looking. 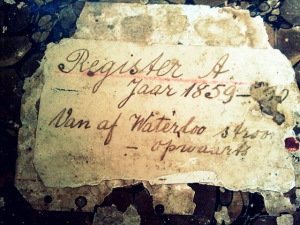 The notes are cold and matter-of-fact. They depict harsh realities and blurred perspectives of decency. And, most often, they turn my stomach.  But, if I could, I would read them like a Toni Morrison novel.